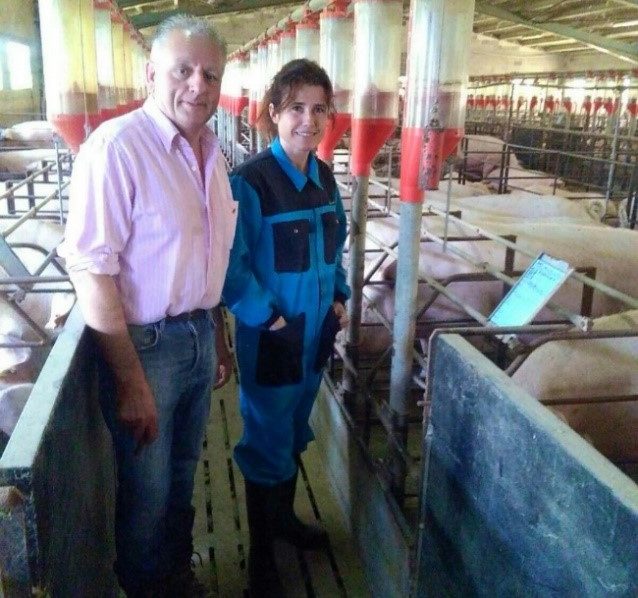 Illa camps farm is one of the best managed farms in the region of Osona, Catalonia.

That’s not something they are willing to say but something that the Department of Agriculture, farming, fishing and feeding in Catalonia (DARP) recognizes and states. Illa camps farm has been awarded for abolishing the use of drugs on their zootechnic practice. They represent an example of great economic results following the legislation in accordance to best practices and sanitary management.

We have interviewed one of the owners, Manel Nogué, who has explained us the secret of their great results:

1. Since when do you know TEGASA?

I know TEGASA for more than 12 years. It all started when I was looking for nutritional counselling in order to improve the general sanitary conditions/health requirements of our farm, as well as to stop the endemic diarrhoea present in the farm, which wasn’t at all possible to manage, neither with drugs neither with Antibiotic growth promoters.

2. Could you give us an overall perspective on how you are organized and an approximate number of animals that you have?

Nowadays, we have 1.100 mothers in a closed circle which comprises two spaces. The first one is where the gestation parks and maternity are placed and the second one is devoted to the transition rooms, where we have 3.800 piglets aged from the weaning process till 8-9 weeks.

3. Which TEGASA products are you using and how?

We are using a vitaminic-mineral corrector for mothers, specially to balance them nutritionally when peripartum; a complementary and grainy feed for improving fertility starting for the weaning process till 15 days after (FERTICOMPLEX E); a lacto starter (SUISTAR) for the 1st week of life with which we make a porridge mixed with water; a second lacto starter for the 2nd-3rd day after weaning. All the pre-starter feed (manufactured with our nucleus PIGLET WEANING 12,5% + our vegetal protein extract TEGAPROT-50), a starter (manufactured with our nucleus PIGLET IBERPLUS S-2,5). And the last product we have been trying is PRONIDUM.

4. Which was the general situation before trying those products? Which were your needs concerning the animal situation?

As I was explaining, we had a generalized and endemic diarrhoea caused by coliforms bacteria and coccides, we had high levels of neonatal mortality, which now we have achieved to reduced till the 1%. The piglets showed problems of growth, also due to the medicated feed. Without mentioning the cost overrun of all the medication and the workload involved.

5. Concerning the PRONIDUM, why did you start using it and why are you continuing to do so?

Basically, because we had coccides problems which were really difficult to manage and we were looking for a final solution. After introducing PRONIDUM we have proved its efficacity and efficiency, which has made us decide to continue with its use.

6. Before introducing PRONIDUM how did you manage the contamination problems of piglets at the birth room?

7. Would you recommend PRONIDUM to other stockbreeders?

Yes, absolutely. As you have seen, there’s no contamination at all.

8. In your personal opinion which elements from PRONIDUM can be more attractive for stockbreeders?

I think there are three main elements to consider:

First of all, it’s a product that really works, once we started using it, the diarrhoea disappeared.

Secondly, the dosage procedure it’s really simple and effective, it consists of one single dosage to the mother and that’s all.

And thirdly, a lot of time is saved, in terms of labour, there’s no need to handle the piglets which implies that their well-being is improved. Besides the price cost is lower.

9. Does PRONIDUM stand out over other competitor’s products?

As far as I know there’s no direct concurrence for PRONIDUM. In fact, I don’t know any alternative which can be given to mothers in order to avoid piglet’s contamination.

10. Which assessment have you received during all this process of the product introduction?

We have received a great technical assessment with TEGASA and particularly with Susana’s help, who has follow-up all the process, giving us guidelines and instructions at a nutritional level, as well as handling instructions to the personal in charge of the animal alimentation. A trusting relationship is fundamental for us when deciding which product to use in each stage of the production at our farm.