Home > News > The Mediterranean pig breeds and its environmental impact. 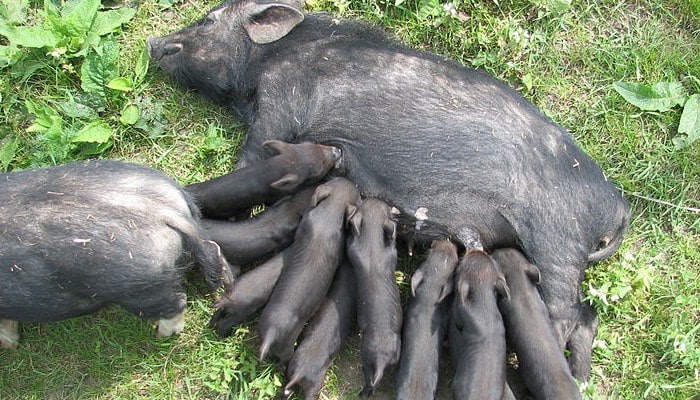 The Iberian pig and most of Mediterranean pig breeds, have been described as a local pig, traditionally linked to the environment in which it has developed, with freedom of movement and feeding base on natural sources. However, little is known about the environmental role of Mediterranean pig breeds, and organic farming is gaining recognition as a relatively friendly production system. In the future, this issue will be subject to a tighter regulation because the swine intensive production expands rapidly in developing countries.

34 % of the greenhouse gases generated in the global pork production chains correspond to the animal production stage. Spain has to import corn and soy to supply the cereal base of pig feed, from more than 39 different countries. These trade flows generate a great carbon footprint, and in addition, intensive pig production produces large quantities of manure. At this point, is important to note that the Iberian pig is traditionally characterised by a long duration of the productive cycle with a low concentration of animals (in free range conditions), and in this case, the manure produced don’t involve any environmental pollution source.

In conclusion, the environmental implications of Mediterranean pig breeds in free range conditions, are yet to be quantified and should be investigated. Therefore, it will be necessary further more research to stimulate a development of environment friendly farming practices that not causes environmental impacts.

The world population is greater than 7.3 billion people, and it will reach 8.5 billion people in the year 2030 and 10 billion people in 2050 according to demographic forecast (United Nations, 2016). The growth rate will be unequal in the different areas of the planet: Europe will have a reduction of its population, while America’s population will grow moderately and Africa and Asia will show the greater growth populations rates. Also, this two areas, Africa and Asia, are regions with high nutritious needs in the world at this moment (World Bank, 2016a).

This tendency means that, it will be necessary in order to provide resources to world’s population, to rise food’s production, and especially, animal’s source products such as milk, eggs and meat. In the last 25 years, the world’s average meat consumption has increased from 34 kilos per person and year, to more than 42, of which pork has contributed in a 40 % (FAO, 2016). In Europe, the average pork meat consumption is settled down over 40 kilos per year and person (Magrama, 2016).

Pork and chickens constitutes 2/3 of the total meat consumed worldwide The pig has been one of the livestock breeds with an important increased of herds, and this trend will continue in order to stock up on food to the increasing demand.

The increase of pig herds will be possible by its zootechnical attributes. In fact, according to the swine’s population graphic, it is distributed around the world focusing on the same areas where human population is located: China, Europe, and the United States. These three regions have the 98.5 % global swine census.

If we consider the human’s population, the rise of the “per capita” income, and the increase rate trend in the meat consumption, to reach the demands of pork requires a total of 1.9 billion pigs that will have a negative effect: a widespread contamination.

Environmental contamination, has been considered as a great concern in very different fields Therefore, it is normal that new research must be carried out in order to search solutions to these environmental problems for several years.

In this sense, the range of environmental hazards is very wide, as extensive as the human activities are. To control or mitigate the pollution consequences, several agreements and conventions have been drafted and approved, including the following list:

The Geneva Convention on long-range transboundary air pollution (1979), approved by the EEC in 1981.

Focusing on pollution produced by intensive livestock activity, and more precisely, by intensive pig production it will be the target of the Technical Assessment Groups – Swine (TAG-Swine) belonging to the FAO Livestock Environmental Assessment and Performance Partnership (FAO LEAP). The LEAP Partnership was founded in 2012 and involves stakeholders across the livestock sector, all who share an interest in improving the environmental performance of livestock supply chains. The objective was to develop comprehensive guidance and methodology for understanding the environmental performance of livestock supply chain (FAO, 2016b)

So far, a set of papers have been elaborated by different Technical Assessment Groups, such as:

A review of indicators and methods to assess biodiversity. Application to livestock production at global scale (FAO, 2015)

Four systems are contemplated in this document: scavening production, semi-intensive systems (Backyard production system), intensive systems with small-medium scale, and with large scale. However, after the explanation of the main characteristics of extensive system linked to the Iberian and other Mediterranean pig breeds (Bangkok meeting, 2015), it was admitted and incorporated to the document and this step allowed the properly evaluate of the “montanera” phase. This specific phase, has a positive environmental impact, and for this reason, the inputs used and outputs obtained should be described carefully.

If we consider the composition of pig feed, we can observe practically in all the cases that the cereal base is corn and soy, corresponding with two deficient products in Spain. Therefore, Spain had to import in 2015, a total of 6.8 million tons of corn from 39 different countries. And regarding the international trade of soy, in 2015 Spain had to import a total of 3.5 million tons of soy from a total of 26 countries.

The case of Iberian pig in “montanera”

An Iberian pig during the fattening period of “montanera”, are feed on the basis of acorns and grass in free range conditions, where the nutritional supplementation is not allowed. For this purpose, this autochthonous pig breed needs a variable surface, depending on the Holm oak and Cork oak density. As a general criteria, according to the RD 4/2014 about quality rules of Iberian pig products, it is accepted that one Iberian pig needs for the fattening period 1.7 hectare, with a density of 20 trees per hectare (at least with 50 years old in order to be fully productive).

At the same time, if we consider the Directive 2008/120/CE of 18 December 2008 laying down minimum standards for the protection of pigs, one pig of 100 kilos must have, at least 1 m2 of surface, in football terms, a “corner space”, while an Iberian pig needs the equivalent of 2.5 football fields. Therefore, since an environmental point of view, it doesn’t generate carbon footprint.

Finally, in relation with the manure generated, considering the low livestock density (1 pig per 1.7 hectare), it is obvious that slurry produced don’t involve any environmental pollution source. because it contributes to improve the soil organic matter, giving rise to a soil enrichment.

Traditionally autochthonous pig breed production linked to the environment in which it has developed, with freedom of movement and feeding base on natural sources, since an environmental point of view, it doesn’t generate carbon footprint. Nevertheless, intensive production systems that requires large amounts of pig feed have a high environmental impact.

The environmental implications of Mediterranean pig breeds in free range conditions, are yet to be quantified and should be investigated. Therefore, it will be necessary further more research to stimulate a development of environment friendly farming practices that not causes environmental impacts.